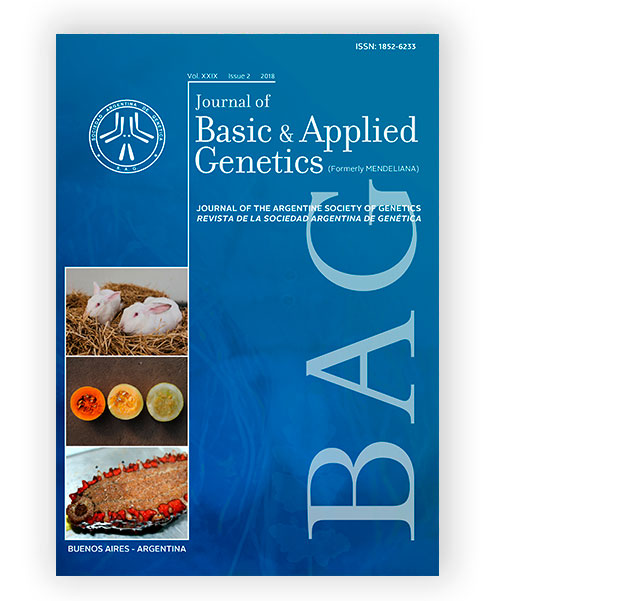 In close reproductive lines of rabbits reared in discrete generations, there is a strong association between the year-season (AE) and the levels of consanguinity (F). Previous studies have shown that when AE and F were considered as fixed effects in a model, the heritability and the genetic tendency were overestimated. The objective of this work was to investigate the consequences of considering AE as either a fixed (M1) or random (M2) effect on the selection of animals. A total of 15,671 records corresponding to the number of rabbits weaned in line A, from the Department of Animal Science of the Polytechnic University of  Valencia, Spain, were used. The comparison of models was based on the rankings of the estimated additive genetic values in each generation and the expected response to the selection. Six scenarios were proposed, varying in selection intensities. In each one, the Spearman correlation was estimated and the percentage of discordance (D) between the animals chosen for M2 but not for M1 was calculated. The response to selection for the animals chosen by either M1 or M2, was estimated as the slope of the regression line between the means of the genetic values predicted by M2 through generations. As the selection pressure decreased, the Spearman correlations increased, decreasing the D. However, at the generation level, both estimators did not always maintain that relationship. The estimated responses to selection were similar when the selection was based on estimated breeding values obtained by using  either M1 or M2. Therefore, no differences are expected between both models with respect to selection.

The sea turtles (Cheloniidae) are a group of seven species of cretaceous origin. Analyses of partial mitochondrial sequences have revealed phylogenetic inconsistences within this group. Nevertheless, these mitochondrial markers have allowed us to understand, explain and clarify population composition in areas of foraging, reproductive habits, inferences of migration patterns and, also, to define management units in the world, in order to trace conservation and monitoring plans. In this study, four methods were evaluated and compared for phylogenetic inference (Neighbor-Joining-NJ, Maximum Likelihood-ML, Maximum Parsimony-MP and Bayesian inference-BI) by using coding genes, ribosomal genes and full mitogenomes of the hawksbill, E. imbricata, and other six species of sea turtles obtained from GenBank. The sequences were analyzed independently and jointly to identify the method and marker that better explain the phylogenetic relationships among this group of reptiles. The NJ, ML, MP and BI trees showed that ND2, COX1, 16S rRNA, ND5, 12S rRNA, ND4 and COX3 are the markers that give phylogenetic trees with better resolution and support, with bootstrap values ranging from 89.0% to 99.98%. ATP6, ATP8, COX2, ND1, ND3, ND5 and ND4L genes presented polytomies. The analysis with full mitogenome often provides highly supported trees (bootstrap 98.0%) compared with single marker analysis. Trees obtained with the BI method and the ND2 gene is the one that better resolved the evolutionary relationships among the species, consolidating the position of E. imbricata within the Carettini tribe with a value of posterior probability of 0.98-1.0. The markers ND2, ND4, ND5 and COIII, not used in previous works, represent a new alternative to explain the phylogeny in this group of marine reptiles. In the present study, a complete mitogenome analysis produced robust and highly supported trees.

MORPHOLOGICAL AND MOLECULAR CHARACTERIZATION OF Isostichopus sp. IN THE COLOMBIAN CARIBBEAN SEA

Isostichopus sp. (Aspidochirotida: Stichopodidae) are sea cucumbers widely distributed in the Caribbean Sea. Amongst them, Isostichopus badionotus is one of the most harvested species. It shows a wide range of morphotypes widespread in the Caribbean region including different habitats (muddy, sandy and rocky bottoms, and sea grass beds). In Colombia, three morphotypes can be distinguished; two of them live in sea grass beds while the third one is found on rocky substrates. The present study describes the morphological characteristics of these morphotypes and analyzes their genetic structures through 16S rDNA and COI data. Our phylogenetic analyses show that the morphotype living on rocky substrates is morphologically and genetically distinct from the two other morphotypes and might not correspond to I. badionotus, the only species of the Isostichopus genus previously reported for this region.

Stevia rebaudiana (Bertoni) Bertoni (2n=2x=22) (Asteraceae family) is a species of economic value due to the presence of steviol glycosides in leaves -mainly stevioside and rebaudioside A- which are non-caloric sugars. In 2013, a collection of plants (genotypes) from four contrasting environments was established in Tucumán, Argentina, for evaluation under local conditions and, eventually, breeding purposes. As a first step, pollen viability and meiosis was studied in a sample of 56 plants. The percentage of pollen viability varied from medium (69.4%) to high (99.6%) in 52 of them, but from low (36.5%) to relatively low (51.5%) in the remaining four. The latter four plants also presented pollen grains of heterogeneous size, which were classified as n (normal, the most frequent size in the sample),

Chrysobalanus icaco is a plant that belongs to the Chrysobalanaceae family. In Tabasco, Mexico, this plant is distributed in the municipalities of the coastline. The main purpose of this research was to characterize the chromosomal structure of phenotypes with pink and purple fruits by the use of conventional staining. To this end, mature fruits were collected in the community of Pénjamo, Paraíso, Tabasco. Seeds were allowed to germinate for 30 days at a constant temperature of 30° C. Roots of 1.00 cm in length were subjected to acid hydrolysis and subsequent staining with orcein. A total of 295 metaphases were photographed and chromosomes of 35 metaphases of the purple phenotype and 30 of the pink phenotype were measured. Both phenotypes presented 18 small chromosomes, which were ordered in nine homologous pairs according to their relative size. No morphological or numerical differences were observed between the karyotypes of both phenotypes. In addition, the t-Student (α=0.05) test did not reveal significant differences between the chromosomes complements of both phenotypes.