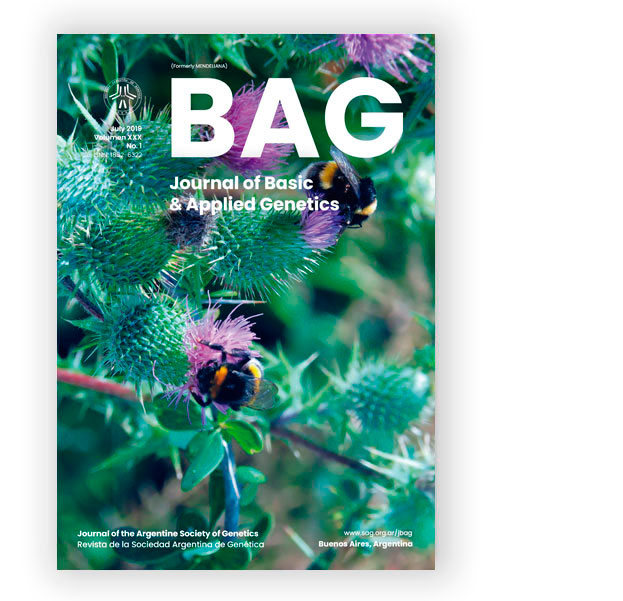 PARTIAL SEQUENCES OF THE GENE THAT CODIFIES FOR THE TRANSCRIPTION FACTOR VPHSFB1 IN Vasconcellea pubescens. FIRST REPORT

Plant heat stress transcription factors (HSFs) are involved in the response to heat. In Arabidopsis thaliana the HSFs genes are completely identified, however there was no information available about these genes in Vasconcellea pubescens (Chamburo) until now. In this preliminary work we describe the VPHSFB1 gene of V. pubescens (gene expression evaluated by RT-PCR and the partial sequence) that was induced by the increment of temperature. From our results, VPHSFB1 could be used as a heat response marker gene in tropical species.

THE IMPACT OF MOLECULAR GENETICS IN PLANT BREEDING: REALITIES AND PERSPECTIVES

Even when conventional breeding was effective in achieving a continuous improvement in yield, Molecular Genetics tools applied in plant breeding contributed to maximize genetic gain. Thus, the use of DNA technology applied in agronomic improvement gave rise to Molecular Breeding, discipline which groups the different breeding strategies where genotypic selection, based on DNA markers, are used in combination with or in replacement of phenotypic selection. These strategies can be listed as: marker-assisted selection; marker-assisted backcrossing; marker assisted recurrent selection; and genomic selection. Strong arguments have been made about the potential advantages that Molecular Breeding brings, although little has been devoted to discussing its feasibility in practical applications. The consequence of the lack of a deep analysis when implementing a strategy of Molecular Breeding is its failure, leading to many undesirable outcomes and discouraging breeders from using the technology. The aim of this work is to trigger a debate about the convenience of the use of Molecular Breeding strategies in a breeding program considering the DNA technology of choice, the complexity of the trait of agronomic interest to be improved, the expected accuracy in the selection, and the demanded resources.

TEST OF INTERACTION IN THE ANALYSIS OF MOLECULAR VARIANCE

The genomic diversity, expressed in the differences between molecular haplotypes of a group of individuals, can be divided into components of variability between and within some factor of classification of the individuals. For such variance partitioning, molecular analysis of variance (AMOVA) is used, which is constructed from the multivariate distances between pairs of haplotypes. The classical AMOVA allows the evaluation of the statistical significance of two or more hierarchical factors and consequently there is no interaction test between factors. However, there are situations where the factors that classify individuals are crossed rather than nested, that is, all the levels of a factor are represented in each level of the other one. This paper proposes a statistical test to evaluate the interaction between crossed factors in a Non-Hierarchical AMOVA. The null hypothesis of interaction establishes that the molecular differences between individuals of different levels of a factor are the same for all the levels of the other factor that classifies them. The proposed analysis of interaction in a Non-Hierarchical AMOVA includes: calculation of the distance matrix and partition of it into blocks, subsequent calculation of residuals and analysis of non-parametric variance on the residuals. Its implementation is illustrated in simulated and real scenarios. The results suggest that the proposed interaction test for the Non-Hierarchical AMOVA presents high power.

CIMMYT maize inbred lines (CMLs) are freely distributed to breeding programs around the world. Better information on phenotypic and genotypic diversity may provide guidance to breeders on how to use more efficiently the CMLs in their breeding programs. In this study a group of 291 CIMMYT maize inbred lines, was phenotyped by nine agro-morphological traits in south Córdoba, Argentina and genotyped using 18,082 SNPs. Based on the geographic information and the environmental adaptation, 291 CMLs were classified into eight subgroups. Anthesis-silking interval (IAE) was the trait with higher phenotypic diversity. A 40% of maize inbred lines, with IAE less than five days, show a good adaptation to growing conditions in south Córdoba, Argentina. The low phenotypic variation explained by environmental adaptation subgroups indicates that population structure is only a minor factor contributing to phenotypic diversity in this panel. Principal component analysis (ACP) allowed us to obtain phenotypic and genotypic orderings. Generalized procrustes analysis (APG) indicated a 60% consensus between both data type from the total panel of maize lines. In each environmental adaptation subgroup, the APG consensus was higher. This result, which might indicate linkage disequilibrium between SNPs markers and the genes controlling these agro-morphological traits, is promising and could be used as an initial tool in the identification of Quantitative Trait Loci (QTL). Information on genetic diversity, population structure and phenotypic diversity in local environments will help maize breeders to better understand how to use the current CIMMYT maize inbred lines group.

Plant cells carry their genetic information in three compartments: the nucleus, the plastids and the mitochondria. In last years, next-generation sequencing has allowed the development of genomic databases, which are increasingly improving our knowledge about the role of nuclear and cytoplasmic genes as well as their interactions in plant development. However, most plant breeding efforts consider the utilization of the nuclear genome, while less attention is given to plastid and mitochondrial genomes. The objective of this review is to present current knowledge about cytoplasmic and cytonuclear effects on agronomic traits bearing in mind the prospective utilization of all the genomes in plant breeding.