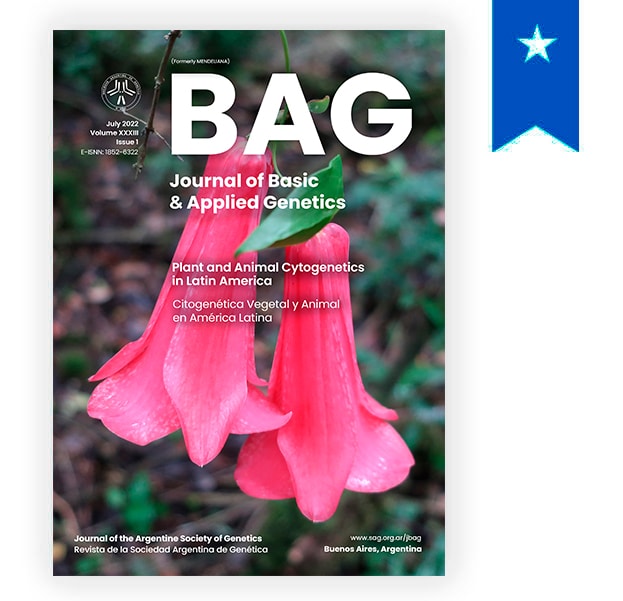 Note from the General Editor

Cytogenetics- defined by Walter Sutton at the beginning of the XX century- developed from the convergence of two originally separated disciplines within the Biological Sciences: Genetics and Cytology. Very rapidly, it became a powerful tool to solve biological problemas based on the existing  relationship between genetic and cytological, principally chromosomal, features. Throughout the years, this discipline was enriched with the advancementes of the Chemical Sciences and Molecular Biology, until arriving at the actual molecular cytogenetics.

Chromosomes contain genetic information and provide mechanisms for its release and the regulation of its transmission according to a precise program or sequence of events. These complex activities of the chromosomes have evolved through natural processes of mutation and selection for the adaptive value that they confer to the organisms or populations that contain them. In this thematic issue, some of the problems in plants and animals that have been addressed from Cytogenetics by research groups of Latin America are presented, with a variety of approaches that range from classical  to molecular cytogenetics.

This issue was co-edited by  Dr. Liliana Mola and Dr. Julio Daviña, to whom I want to express my most sincere acknowledgement for the  performed work, which has been much and of excellence.

Chile is located in the south-western region of South America along the Pacific Ocean and contributes to the worldwide flora with ca. 6,120 species of Bryophyta, Pteridophyta, Pinophyta, Gnetophyta, and Magnoliophyta (1.9% of worldwide total species), exhibiting high endemism across all plant divisions. Little is known about the genetic diversity of Chilean land plants worldwide, including their cytogenetic and molecular characteristics. In 2012 we published the first state-of-the-art review in Cytogenetics of Chilean Angiosperms. The article gathered 78 publications from 1924 to 2010 accounting for approximately 139 species (2.8% of total Chilean species). The aim of this paper was to review the advances in cytogenetic studies of Chilean land plants, reporting additional cytogenetic data for species of four botanical divisions until 2020. Cytogenetic data were searched in the CPCD (Chilean Plants Cytogenetic Database). In total, we found 180 publications from both Chilean and foreign researchers. To date, cytogenetic data have been reported for 499 Chilean land plant species (8.2% of total) belonging to 244 genera and 117 families. In this context, the 2001-2020 period has been among the most productive regarding publications, with 74 available reports that include 163 additional species. Based on chromosome numbers, angiosperms and bryophytes registered the greatest diversity with 55 and 29 different 2n, respectively; both divisions having the greatest number of studied species. Given the importance of increasing information on Chilean land plants, it is expected that more publications will contribute to the knowledge of their cytogenetic diversity in the near future.

A BIRD´S-EYE VIEW OF CHROMOSOMES DURING MEIOTIC PROPHASE I

The present review aims to summarize the research carried out in relation to meiosis in birds, especially by observing the protein axes of the chromosomes in prophase I of meiosis. This line of research, initially developed in Argentina, has provided key data in the study of the evolution of sex chromosomes and the mechanisms involved in the frequency and distribution of crossing over in birds, among other topics. Some of these contributions, in addition to those made by other authors, are described also providing the general theoretical framework or the hypotheses that support them.

CAUSES AND CONSEQUENCES OF DNA CONTENT VARIATION IN ZEA

Cytogenetic evidence indicates that Zea, which comprises maize (Z. mays ssp. mays) and its wild relatives, is an allopolyploid genus. Our research group has carried out numerous cytogenetic studies on Zea species, mainly focused on native Argentinian and Bolivian maize landraces. We found a wide inter- and intraspecific genome size variation in the genus, with mean 2C-values ranging between 4.20 and 11.36 pg. For the maize landraces studied here, it varied between 4.20 and 6.75 pg. The objectives of this work are to analyze the causes of genome size variation and to discuss their adaptive value in Zea. This variation is mainly attributed to differences in the heterochromatin located in the knobs and to the amount of interspersed DNA from retrotransposons. Polymorphisms in presence or absence of B-chromosomes (Bs) and the population frequency of Bs are also a source of genome size variation, with doses ranging between one and eight in the landraces analyzed here. Correlation analysis revealed that the percentage of heterochromatin is positively correlated with genome size. In addition, populations cultivated at higher altitudes, which are known to be precocious, have smaller genome sizes than do those growing at lower altitudes. This information, together with the positive correlation observed between the length of the vegetative cycle and the percentage of heterochromatin, led us to propose that it has an adaptive role. On the other hand, the negative relationship found between Bs and heterochromatic knobs allowed us to propose the existence of an intragenomic conflict between these elements. We hypothesize that an optimal nucleotype may have resulted from such intranuclear conflict, where genome adjustments led to a suitable length of the vegetative cycle for maize landraces growing across altitudinal clines.

Important changes in vegetation types occur along elevational gradients. The genus Gymnocalycium is endemic to southern South America, and its species are distributed along elevational gradients. In particular, Gymnocalycium quehlianum is a globular cactus endemic to the Sierras de Córdoba. Studying cytogenetic aspects and DNA content in populations throughout their distribution is key to understanding the species. DNA content and cytogenetic characteristics were analyzed in four populations of G. quehlianum (615, 744, 948 and 1257 masl). The genome size in the four populations varied between 3.55 and 4.30 pg. The populations were diploid (2n = 22). All populations showed the karyotype formula of 10 metacentrics (m) + 1 submetacentric (sm). The species presented symmetrical karyotypes and constitutive heterochromatin CMA+/DAPI- associated with nucleolar organizing regions, always found in the first pair of m chromosomes. The 18-5.8-26S rDNA locus is found in the terminal regions of the first pair of chromosomes m, and the 5S locus is adjacent to the 18-5.8-26S locus. A tendency for DNA content to decrease with increasing altitude was observed.

In this study, we investigated the chromosomes of three species of Sicarius spiders from the Brazilian Caatinga, using classical and molecular cytogenetic techniques. Based on the phylogenetic approach, we also discussed about the variation of diploid number, types of sex chromosome system and changes in the localization of ribosomal genes of Scytodoidea. Sicarius are Synspermiata spiders that together with the genera Loxosceles and Hexophthalma constitute the family Sicariidae. In this group, the available cytogenetic data showed a low diploid number range (2n♂=18 to 2n♂=23) and the presence of only multiple sex chromosome systems (X1X2Y and X1X20). Mitotic metaphase cells exhibited 2n♂=16+X1X2Y for Sicarius cariri and S. ornatus, and 2n♂=18+XY for S. tropicus. In these species, silver impregnation revealed nucleolar organizer region (Ag-NOR) on the terminal region of pair 1. In S. ornatus and S. tropicus, the results obtained with fluorescent in situ hybridization (FISH) using 18S rDNA probe were similar to Ag-NOR, however in S. cariri, the ribosomal sites were localized in the terminal region of the X1 sex chromosome. In this work, we presented the first description of a simple sex chromosome system for Sicariidae, helping to understand how the XY sex chromosome system evolved from the X1X2Y system. Additionally, FISH data incongruous with Ag-NOR indicate that the cytogenetic studies in Sicariidae allow investigating the relation between the karyotype evolution and the distribution and the activity of rDNA genes.

EVOLUTIONARY DYNAMICS OF AUTOPOLYPLOIDS IN NATURAL POPULATIONS: THE CASE OF TURNERA SIDOIDES COMPLEX

Turnera sidoides (x=7) is one of the few well-studied South American autopolyploid complexes. Since polyploidy has played a prominent role within this complex, ongoing studies in T. sidoides focus on understanding the mechanisms involved in the origin and the establishment of polyploids using integrative approaches. This paper synthesises the results of more than 20 years of research on this topic. Cytogenetics analysis provided evidences for the production of unreduced male and female gametes, supporting the hypothesis of bilateral sexual polyploidization as the mechanism of origin of polyploids in T. sidoides. The finding of viable triploids suggested that unilateral sexual polyploidization could also be an important mechanism for the origin of tetraploids in T. sidoides. The occurrence of plants continuously forming many unreduced gametes would play a key role in the establishment of neopolyploids in natural populations. Also, the higher number of propagules that tetraploids contribute to subsequent generations, the ability to multiply asexually by rhizomes, and the occurrence of occasional cases of self-compatibility and successful illegitimate crosses in polyploids increase the likelihood that a low frequency of neopolyploids can be maintained in natural populations of T. sidoides. In addition, integration of cytogeographic and genetic divergence data together with past niche modelling provided further insights supporting the hypothesis that historical climatic and geomorphological events provided favourable conditions for the establishment of autopolyploids, with the wider distribution of tetraploids of T. sidoides being the result of their range expansion.

The subfamily Bambusoideae comprises three monophyletic tribes, Arundinarieae, Bambuseae and Olyreae. Here we report the gametic number and the chromosomal meiotic behavior of two species belonging to the herbaceous tribe Olyreae, Olyra latifolia and Olyra humilis. Accessions were collected in Misiones, at Northeastern Argentina. We report a new gametic number for O. humilis, n=18, and we confirmed n=11 for O. latifolia. Chromosomal features, like the basic and gametic chromosome number, are important in understanding the evolution of the Poaceae family, especially in delimiting clades and elucidate inter and intra-clades relationships, and therefore it is necessary to continue producing this type of data.

Zephyranthes citrina is an ornamental American bulbous plant used as an ornamental garden crop for the aesthetic qualities of its yellow perigonium. The objective of this work was to characterize the species by classical chromosome staining and fluorochrome banding. A sporophytic chromosome number of 2n=8x=48 chromosomes was observed, being the karyotypic formula 20 m + 26 sm + 2 st. Satellites were detected in the short arm of metacentric chromosomes 8, 9, 11 and 12, which colocalized with constitutive heterochromatin CMA+/DAPI-/0 bands. The karyotype comprised chromosome pairs with terminal constitutive heterochromatin bands that included satellites and heteromorphic clusters indicating that it is an allooctoploid. These results will be used as a tool for monitoring genetic improvement, in interspecific crosses and its progenies and in biotechnological procedures by in vitro culture. Key words: constitutive heterochromatin, chromosome banding, bulbous, plant genetic resources, karyotype Language: English
DOWNLOAD PDF

Cytogenetics studies in Neotropical Primates (Primates: Platyrrhini) have shown that these mammals comprise a heterogeneous group at the chromosomal level. The remarkable variety of karyotypes described provides significant evidence on the possible role of chromosomal rearrangements in their evolution. In the Grupo de Investigación en Biología Evolutiva (GIBE), the line of research on the evolutionary divergence process in Platyrrhini considering different aspects of the organization of the genome has been established and developed uninterruptedly for more than 30 years. Among the advances made in recent years is the quantification of the genome size in six species of caí monkeys (Cebus sp.) and two species of howler monkeys (Alouatta sp.) and the description of the composition of base pairs in the constitutive heterochromatin regions in the genera Cebus and Ateles. The first descriptions were made of the karyotype and meiotic behavior in early prophase I of two species of howler monkeys, Alouatta caraya and A. guariba clamitans. In this last species, the first pentavalent-type sexual system X1X2X3Y1Y2 was identified in a primate species. The organization of euchromatin was characterized in terms of the content and distribution of AT and GC nucleotide bases in three species of howlers and in two species of caí monkeys. These, among other investigations, allowed contributing in an original way to the knowledge about speciation at different levels, as well as about the architecture and dynamics of the genome of these primates.